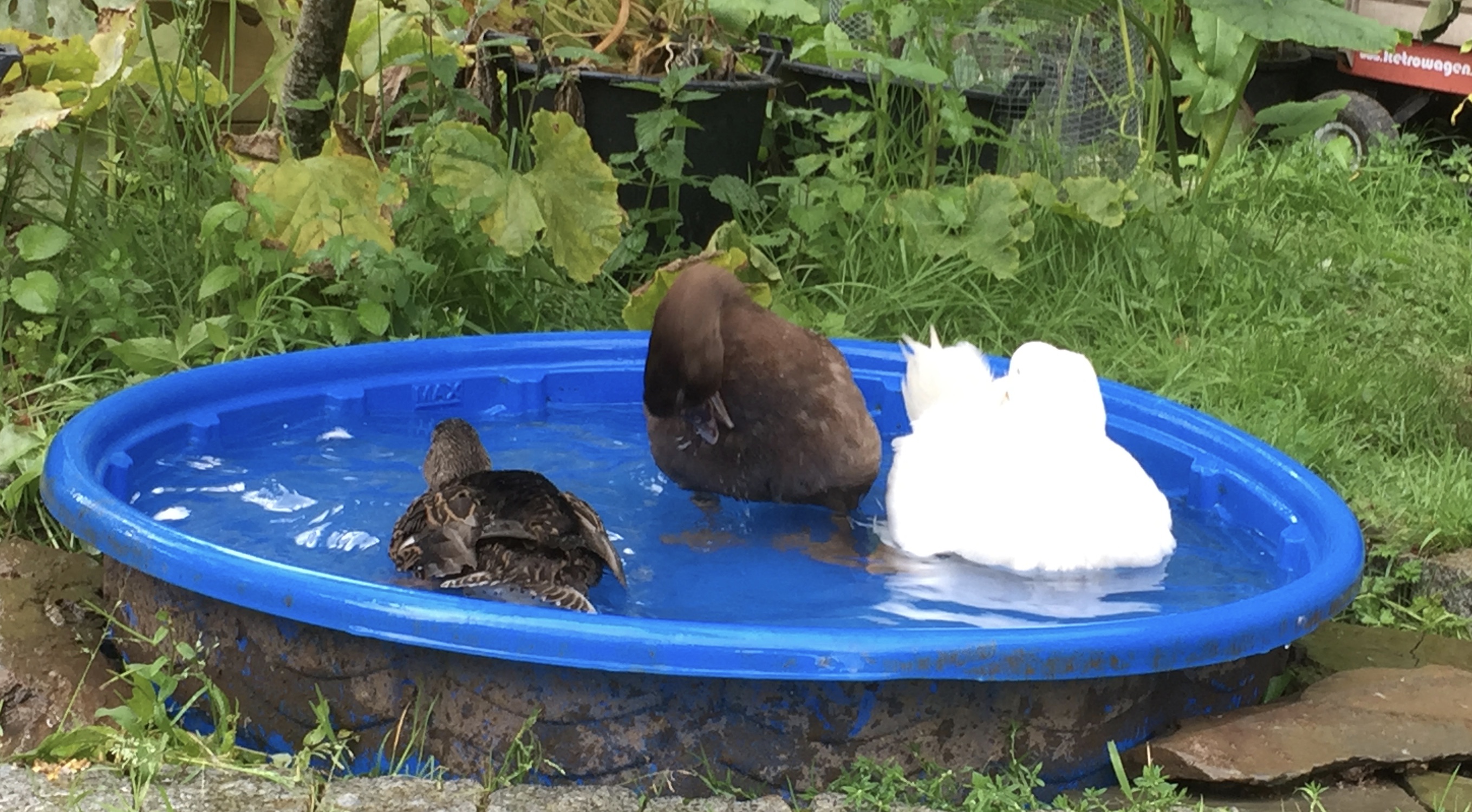 Last year, while lugging trays of seedlings from the poly tunnel to the raised beds, we heard a loud, persistent cheeping. After a frantic 10 minute hunt in the long grass, we found a lonely, sad looking little duckling frantically looking for it’s mum. So, we waited. We’ve had lone ducklings in the field before. Some of them we have raised and released but most of them, if left alone, are rounded up by the mother ducks, scolded for getting lost and then welcomed back onto the fold. This time sadly, mum didn’t re-appear so we scooped it up and set about making it a home. The poor little thing looked very sad and dejected huddled by itself in a corner of it’s new home under a heat lamp. So, using the power of social media, we found it some friends. 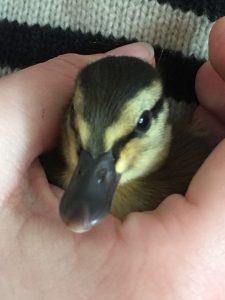 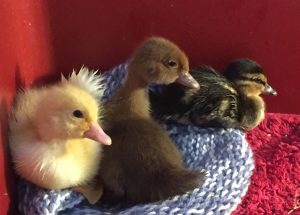 The cute little fluffy lost duckling is a mallard. In fact, all the ducklings we have raised in the past have been mallards. Happily, once they are fully grown, they are really simple to release back into the wild. Firstly, by moving them outdoors into a secure pen for a few weeks when they’re old enough to go outside. There they can get used to being outdoors and play around in a shallow pool. Finally, after a few weeks in the safety of the pen, we release them onto the pond in our field. There, they tend to spend a few days swimming around before they fly off into the sunset to be wild ducks again.

This time its been slightly different. Our little orphan duckling had some non-wild friends. Very closely bonded friends actually and we thought that it would be very unfair to separate them. So this time, we decided to keep the little duckling. We named it Lulu, who, as I mentioned before, is a mallard, The little brown duckling is Coco, a chocolate muscovy and the little yellow duckling is BB short for Big Bird who is an Aylesbury. Coco and BB were born on a farm just down the road from where we live. I have to say, I am totally in love with them. They are messy. Messy beyond belief. My lawn has been reduced to little more than a swamp in the time that we have had them but I totally adore them.

We totally got the sexes of each of them wrong too. We didn’t know how to sex them other than to wait for them to grow up so we guessed. We were way off the mark so there have been a couple of name changes. 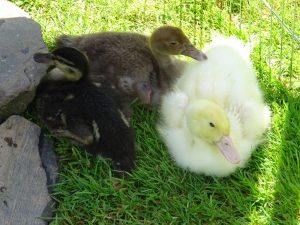 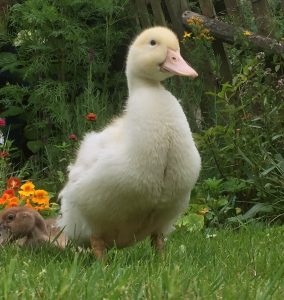 BB, despite being a total mud-loving monster is, in fact, female. 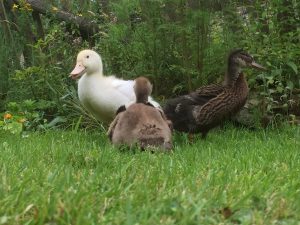 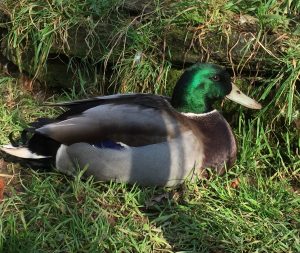 Lulu, the original little duckling, we assumed was a girl because of her girly plumage (the right-hand duck in the middle picture) turns out, she is a he and he is now called Louis. 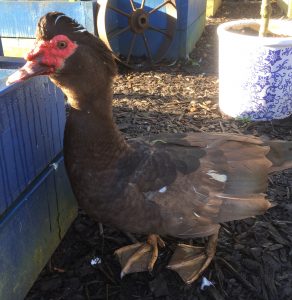 Finally, Coco, the chocolate muscovy is still called Coco. We had originally thought Coco was a girl, it turns out she’s a boy too. But I like the name.

For the first few weeks, the ducklings lived inside, in one of the spare rooms where they could stay warm. But ducklings grow up fast. It wasn’t long before we were taking them outside to enjoy the warm summer sun during the day and bringing them inside in the evening so they were safe and warm at night. We carried on doing this until they grew so big, I physically couldn’t carry the tub with the three of them in. Coco and BB weigh a ton!

After a while, it became clear that I couldn’t continue to lug three whopping great ducks into the house every evening without giving myself a hernia. It was time to build them a home of their own. Luckily, my husband is quite handy with a saw and a nail gun so I left him to it. This is what he came up with. The chickens liked it too 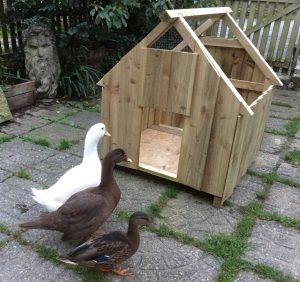 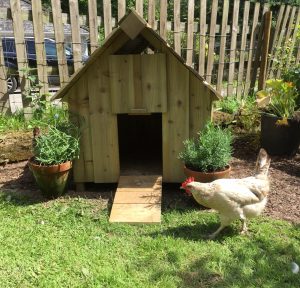 BB and Coco were captive bred ducks and although Coco can fly, he’s not going to be going very far. He’s a big, heavy bird and he’s not very good at flying. Mostly, he flies into things. The cherry tree, the raised beds and the side of the chicken house. BB doesn’t fly. I have never seen her get so much as a foot off the ground but technically, Louie is still a wild mallard. We haven’t clipped his wings and one day, he may very well find himself a Mrs Louie and disappear off into the sunset with her. But for now, the three of them are happy to potter around the garden causing absolute mayhem. Is it me or are ducks totally addictive? I can’t wait to get some more.

Filed Under: Blog
Tags: Cornwall, Ducklings, Ducks
Seeds You Can Plant In January
Building A New House For Our Llamas

The first seeds have been sown .....let the sprout

Day 18 of #mymonthontheplot is "recycled" We have

Day 17 of #mymonthontheplot is "Shades of Green" N