As a child, I grew up with caravans. First with a cute little Sprite Musketeer, which we towed to Anglesey for our holidays and then, with a large static caravan in the same place on the same caravan site. We had many, many happy holidays there in our caravans and it’s safe to say that I absolutely love them. I love the sound of rain on the roof. I love the gentle flapping of the awning in the summer breeze and I love the smell of bacon frying in the morning on the little gas stoves. I have always wanted one but sadly, I have never managed to actually own one myself. That is, until now.

I am beside myself with excitement. Last week, by some miracle of fate, I became the proud owner of my very own caravan. Now, it’s not posh, it’s not fancy and it’s certainly not a project for the faint of heart but it’s mine. It’s totally mine. Well ours, I guess. In fact, if all goes to plan, it might conceivably become our home for a while when we build our new house. But thats a whole other blog post!

So, would you like to see it? Well here it is. 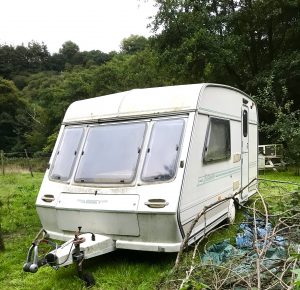 I know, it’s not much to look at. Inside it’s nothing special either, in fact it’s positively NOT special  however, I can totally see what it will look like when I’ve finished with it. And ………. guess what the best part is. The best part was the price. You won’t actually believe the price, I could barely believe it myself. The price was ………

I kid you not!! And even better, the very lovely man delivered it to me all the way from Torquay for an extra £20. So, for the princely sum of £40, I have a caravan. I am so thrilled I cannot tell you.

So here is the inside. As I said, it’s nothing special. But it will be. These pictures are before and after we cleared out all the stuff that was in it when it arrived. 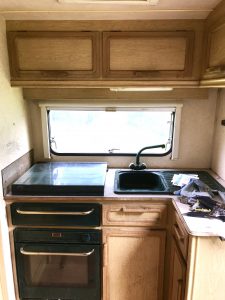 The kitchen after. Not really much different but we ripped up the Lino 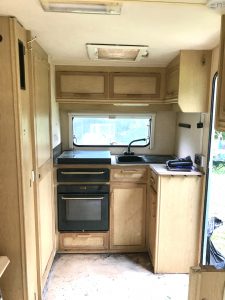 The bathroom before we emptied it. 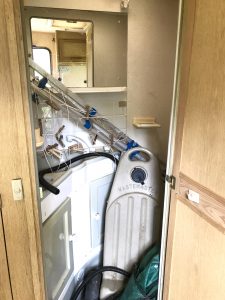 After we moved the stuff. 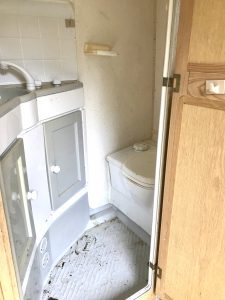 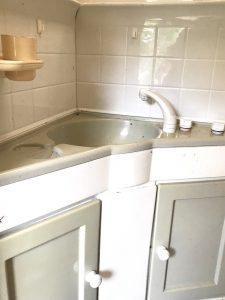 The seating area before 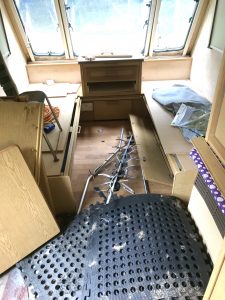 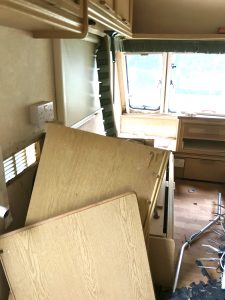 After in the seating area. 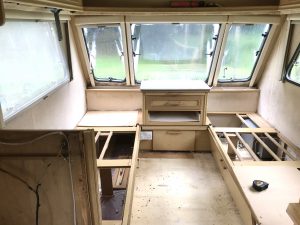 It needs a thorough clean. Its not been used for a while but the shell itself is sound and there is no damp at all. Add to that all the extras it came with, even thought they looked like junk, and once it’s up and running, I think it will be amazing. The plan is to use the caravan mainly as an extra bedroom when we have people to stay. We are having a lot of family to stay over Christmas so it absolutely HAS to be finished by then.

One minor issue. There is a problem with the floor. When you walk on it, there are a couple of squishy bits. The first one is up by the seating area and the second one is by the kitchen. When I googled “how to fix a caravan floor”, it turns out that that it’s something called de-lamination. Before the early 1980’s, caravan floors were made of solid wood but they were heavy and made the vans heavy. After 1983, I think it was, the floors were made of a kind of plywood sandwich, with a piece of plywood, a layer of polystyrene for insulation with another layer of plywood on top. It’s lighter and it makes the caravans lighter, which is great for towing but over time, De-lamination occurs. This is when the layers of flooring become unstuck and the polystyrene get squished, resulting in the squishy areas of floor. Not very technical but thats basically what has happened with the floor. In the next caravan project post, I will be showing you how I fixed the squish.

So what do you think? I’m so thrilled. All we have to do now is name the caravan. In my opinion, like boats, caravans should definitely have a name. I will be revealing ours in the next project post.

Do any of you own a caravan? Possibly one that has had a makeover? Leave us a comment and share a picture, we would love to see them.

Filed Under: Projects
Fixing the De-lamination of the Caravan Floor

Our next challenge ....... watch this space #ourne